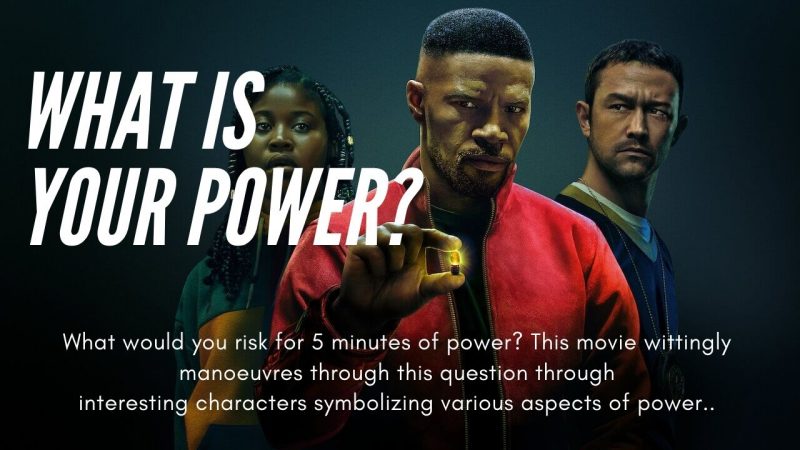 So I watched Project Power over the weekend after I heard it was trending on Netflix. The super hero action flick is one of the streaming giant’s latest productions and has proved to be a hit with global audiences this August.  Now while I found the film’s  plot and action fitting the mould of most superhero movies, it was the theme of the story that struck me as more interesting and worth discussing here.

For those completely unfamiliar with the movie and are yet to view the trailer, well it’s a sci-fi story that also has a comic-book feel and  involves three main characters. An unlikely trio made up of a former soldier played by Jamie Foxx  as Art, a disgraced cop called Frank played by Joseph Gordon and Robin,  a troubled schoolgirl.

The three work together  to find the source behind a dangerous pill that provides temporary superpowers. Art wants to find it so he can rescue his daughter who’s being used for experimentation by the company behind the pill while Frank wants to stop the crime wave rocking the city of New Orleans as a result of the pill.  Robin is a street dealer selling the power pills and is initially forced into the chase by Art. However, after learning of Art’s kidnapped daughter, she willingly helps to save her.

I must admit I’m a big fan of Jamie Foxx’s work. He’s a super talented artist as indicated by the tremendous success in comedy, music and acting he has enjoyed in his long career. In 2005 he scored an Oscar for his portrayal of Ray Charles and so when watching an artist who’s won a string of major awards including a Grammy by the way, you expect some good things and I found that in Project Power’s theme.

For impactful storytelling, the theme is very important as it allows the audience to make sense of the decisions and actions of the characters. Simply put, the theme is what the storyteller wants us, as the audience to learn from the story. It’s K.M Weiland, author of award winning writing guides such as creating character arcs who says that “Your story’s theme is what will raise it above the pack, out of mere entertainment, into something that sticks with readers, impacts their lives, and maybe even challenges them to grow.”

Rightly titled Project Power, this movie wittingly manoeuvres through power as a theme by asking a very simple and interesting question which builds the plot – What would you risk for five minutes of pure power? So as not to spoil it for those yet to watch, let’s just say that the answers are provided via an interesting array of characters who through what they do or say about the power pill symbolize different aspects of power –  greed, lies, violence, and domination on one hand or self knowledge, acceptance, and  altruism on the other.

Taking the power pill  exhibits each individual’s hidden power.  For example a bulletproof skin for the cop. For some it’s invisibility, super strength or genetic mutation and for others, the reaction is even deadlier,  like Newt ( Machine Gun Kelly) whose power is thermoregulation but from the look of his apartment and burn scars on his skin, we get a sense that he has no control over his power which ultimately destroys him.

For most, taking the drug is motivated by narcissistic reasons and this is best symbolised by the company making the drugs. The villains of the story who run the company don’t mind human experimentation with a drug that is obviously dangerous as long they achieve their nefarious goals.

Only two characters, Art and the Frank, take the power pill in order to help someone else.  They do this in order to stop the villains and save Art’s daughter, who’s being held captive for experimentation because she’s a permanent source of the power contained in the pill. But curiously, during their whole dangerous mission to the underworld,  Robin never takes the pill which makes us wonder what her secret power could be. Yet she still shows so much courage and heroism in helping save the  girl. Perhaps her inner strength is enough?

Let’s consider Robin’s character a bit more. She’s a victim of a broken system in a city and neighborhood that barely survived a hurricane. Her mom is sick, they don’t have insurance and her school can’t do anything for her. So she gets into dealing the power pills to take care of her mom. Here’s a child who enters a dangerous world of crime controlled by the drug making company selling to poor and forgotten people in neighborhoods like her’s, a dangerous drug that promises exceptionalism but ends in tragedy for some. Yet through it all, Robin remains determined and doesn’t get swallowed up by her turbulent environment. Towards the end of the movie, Art reminds her that she has greatness inside of her and she has to use it.

And so for  a moment, consider your life as a story in which you are playing the leading role or don’t know you are yet. You have desires,  goals and expectations but something or someone is standing in the way – obstacles, and they can be both real and imagined. Your ability to realize your desires against all the odds stacked against you is your power. But if you have not seen or understood your power, then you remain a powerless victim. What do you think your power is? I think mine is using different forms of storytelling like film, photography and writing  to hopefully create a positive impact around the things I feel strongly about.

In one of my favorite books by Ben Okri – A way to be free – he says there’s no such thing as powerless people. There are only those who haven’t seen and have not used their power and will.